We all know that one of my money saving strategies is to try to stay somewhere that has a breakfast included.  That strategy paid off quite well on our recent trip to Scandinavia.  We spent 7 days in Sweden and 3 days in Iceland, both of which are extremely expensive in general.  So, any simple way to cut expenses is worthy of mention.

Our first day in Stockholm, we awoke from our jet-lagged fog,  scurried about quickly and clumsily to get dressed and appear decent enough to go to the breakfast room.  You see, there was no coffee maker in the room, and we both require coffee to operate as decent human beings...  We entered a room with a rather impressive spread, not that I should be surprised.  The Swedish did, in fact, invented the Smorgasbord. I immediately made my way up to the coffee machine, taking mental note of the tiniest coffee cups I had ever seen.  I calculated that I'd probably have to drink at least 5 or 6 of these in order to get the proper caffeine intake to survive my day.  Tiny coffee cups are fairly traditional in Scandinavia.  While initially, I found these coffee cups quaint, if not a slightly inconvenient delivery system for my coffee, I was delighted to realize that the Swedish take their coffee quite seriously.  Scandinavian coffee is NO JOKE.  It is extremely strong, and I was thrilled.  Perhaps the coffee's sheer strength would help me limit the number of cups I'd consume.  Funny side note:  apparently Swedish folks find American coffee cups to be pretty comical.  It seems we've acquired a reputation for bizarrely, huge coffee mugs. 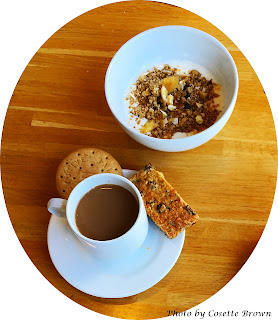 Next, I made my way over to the cold beverage station.  What can I say, I'm a gal that likes her beverages!  I had my choice of water, orange juice, and apple juice.  Just to the right of this was a station for yogurt and cereal.  The primary cereal choice was muesli (and something else, perhaps corn flakes).  There was also a large container of mixed berries, followed by a large container of yogurt.  The berry mixture was relatively tart, containing Lingonberries, blueberries, and blackberries it seemed.  The yogurt is quite different from what an American would expect: much thinner and tart.  An American might expect these to be sweeter foods, but in Scandinavia, they're tart.  I quite liked it that way, as I don't have much of a pallet for sweet foods in general.  Even for me, it was a little tart, so I sweetened it slightly with honey from the coffee and tea station.   Just to the left of the cold beverages, there was a large wooden cutting board with several loaves of bread.  There were mostly darker varieties and a toaster. 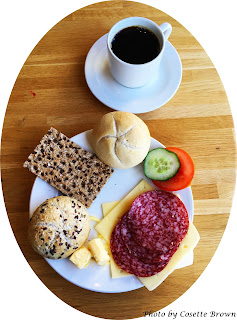 There was a separate smorgasbord set up with baskets of rolls and hard bread (think: WASA variety hearing.  I've seen eggs three ways: scrambled, soft-boiled, and hard-boiled, complete with egg-cups.  Your average American doesn't use an egg-cup, so I was eager to give this a try.  I am pleased to report that I was successful at taking the top off my soft-boiled egg with minimal mess, though I'm sure it didn't look particularly elegant coming from me!  For those looking for some familiarity, bacon and sausage were both available, right next to the meatballs and lingonberry jam.
crackers.  Long, hard, rectangles, grainy, and limited flavor on their own).  The rolls and hard bread (crackers) are meant to be topped with cold cuts and vegetables.  Cheese, a couple of salami's, and ham seem to be fairly traditional choices, along with cucumbers, tomatoes, and maybe some sliced red bell peppers.  The most common way to eat this would be to make open-faced sandwiches with meat, cheese, and vegetables on it.  You are also likely to see

In general, a Scandinavian breakfast is a savory one.  There are a few similarities to a standard American breakfast, but several marked differences.  The above described breakfast was in Stockholm, Sweden.  Breakfast in Reykjavik, Iceland was similar with a few exceptions.  The only eggs to be seen were hard-boiled, and no breakfast sausage, bacon, or meatballs.  Everything else was more or less the same. Overall, it made me rethink breakfast, and I think I could definitely get used to a traditional Scandinavian breakfast.
By Alacias Enger - October 22, 2017 No comments: 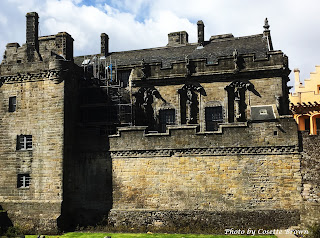 No stay in Edinburgh, Scotland would be complete without making a side trip to the neighboring town of Stirling.  From Waverly Station, Stirling is a quick and inexpensive jaunt.  When you get off the train in Stirling, you can easily grab a taxi.  We chose to walk.  The signs are pretty easy to follow, though it is up a long, winding hill. 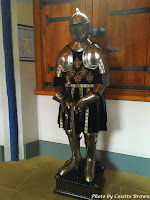 Stirling Castle is the famous once-home of James V.  The guided tour will take you on a journey back in time to the 1540's during the childhood of Mary, Queen of Scots.  The beautiful view overlooks the battlefields of Bannockburn where William Wallace and Robert the Bruce won victories in a war for independence against England.  You can also see the battlefield of Stirling Bridge from this castle which sits on volcanic rock.

On your way out of the castle, stop by the Argyll House.  Argyll House was the 17th Century residence of the Earl of Stirling.  It is decorated in true Renaissance fashion.  This beautiful piece of history is managed and maintained by Historic Scotland, and makes a brilliant addition to a side trip to Stirling.

A side trip to Stirling doesn't necessarily have to cost you more than a half day, though you could stretch it out with an exploration of the quaint shops and restaurants in the surrounding neighborhoods.
By Alacias Enger - October 02, 2017 No comments: