I am referring to this as the "Extra 1/2 Day" rather than simply Day #3 because we were given a 48-hour pass.  To your average American, this means "2 Days."  In Sweden, they say 48 hours; they mean 48 hours!  So, technically, we had till 11 AM before our time would officially run out.  Seeing as how museums and various attractions typically open at 9 AM, it would seem that we'd only fit one attraction in...  Think again! 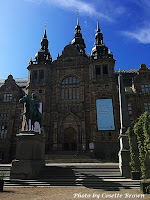 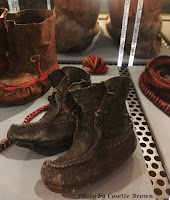 After eating breakfast at the hotel, we stopped by our favorite coffee and gelato shop, Morelli, for a coffee to go.  We then went straight to the waterfront where we could buy tickets for a boat tour. We knew we needed our passes to buy the tickets, but once we had those tickets, they would no longer need our passes.  So, we got in line for the ticket booth right before they opened, and purchased tickets for an afternoon boat tour.  With tickets in hand, we grabbed the hop-on-hop-off boat across the water to the Nordic Museum and were there by ten.  We used our pass to get in, and stayed for just under two hours.  The exhibits were quite remarkable, containing all things that I love: fashion, design, and theatrics.  They also had a special exhibit which was of extraordinary interest to me about the Lapps.  Also known as Sami, these people are the indigenous people of the far north, encompassing a small band of territory that includes Norway, Sweden, Finland, and Russia.  The terms Lapp or Sami are shortened from the words that represent the geographical areas they come from: Sapmi or Lapland.  Indigenous cultures are near and dear to my heart for a number of reasons: I grew up steeped in Native American culture because of where I grew up; I am Scandinavian; and my partner is part Cherokee. Because of these interests, we spent a great deal of our time there.  Though I must say, I am a huge lover of Scandinavian design, with its sleek elegance and space-saving features, as well as theatre arts and fashion, all of which are represented incredibly well at the Nordic Museum.  Honestly, upon returning to Stockholm, I see myself carving out more time for this particular attraction.

We made it back just in time to catch our boat tour but had to splurge for lunch on board due to a simple lack of time between places (especially because we were taking public transit).  We took the "Under the Bridges of Stockholm" boat tour.  This one was entirely less classy than the last boat tour we took (Vaxholm/Archipelago).  The boat resembled the hop-on-hop-off boat in style only it had large tables that might seat 6-8 people and a snack bar in the back.  We were too hungry to wait two hours so we ended up grabbing some food at the snack bar.  Many people there had brought food on board, and this didn't seem to be a problem.  I would highly recommend bringing your food on board if possible because from my perspective, only really the beverages were a decent deal.  The food was terribly expensive, and the quality was mediocre at best.  The tour in and of itself was great though.  There was a headset that offered the description and history of each bridge, and several stories and funny little anecdotes that went along with it.  I would recommend this tour near lunchtime if you bring your own food, or with children, if you want to maximize your pass, but need to take a bit of a break with them.  I saw many sleeping children and relaxing parents on this tour.

It was 3:00 by the time this tour was finished, so we spent our afternoon window shopping a bit, and finally grabbed pizza before going back to the hotel.  I've always said, you can learn a lot about a place based on what the pizza is like (maybe that's just because many years ago, my partner used to run several pizza restaurants)...  Stockholm pizza is pretty good.  We ordered a cheese pizza with black olives.  We got back to the hotel only to realize that literally nothing had been cut up!  Olives were completely whole, and the pizza wasn't cut into slices.  Could be a problem if you are in a hotel room without any silverware (which we were)!  Thankfully, we always throw a wine key into our suitcase when we travel, so we used it to cut our pizza!  Once we finally got into that pizza, we discovered that Swedish pizza is definitely worth trying!