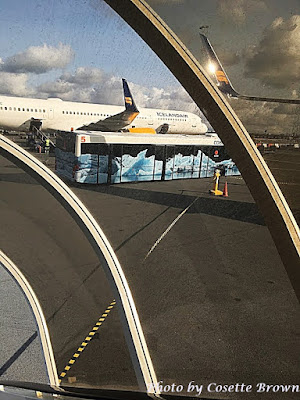 I boarded my first Icelandair flight this summer and immediately noticed that there was a flight attendant handing out bottles of Icelandic water to each passenger as they boarded regardless of whether they were flying first class, business, or coach.  In all honestly, this was a pretty good start to a flight.  It made me feel like my needs were under consideration from the moment I stepped on board.

I slipped into my coach seat, which didn't feel any tighter than any other airline, and promptly started looking at my entertainment options.  Before I could do anything further on the television monitor, I was required to sit through a variety of advertisements for Icelandic companies. Once I got past them, I found that there were not only your standard tv and film option, but also some audiobook options as well.  One devoted to the history of the Vikings caught my attention, and thus my selection was made.

As I sat there enjoying my Viking audiobook, I pondered my day up to this point.  I was fairly disappointed that Icelandair's carry-on luggage size requirement is a couple of inches smaller than what we are used to domestically.  So, we had to check our bags.  On the bright side, we were not charged for it because they were our only suitcases (we like to travel light).  I just happen to like having my suitcase with me. It's that whole "lost luggage" thing I'd prefer to avoid.  There's also not much chance of securing a first class or business class bump without paying extra for it.  Icelandair has a system that lets you bid for upgrades about 48 hours in advance of your flight.  The system is pretty easy to navigate, but the minimum bid requirement didn't feel like a great value to me, so I didn't bother.

Part way through the Viking audiobook, I started to get hungry.  Fortunately, I had used Icelandair's online system to pre-select and pay for our meals (if you earn saga points with them, you can also use these points to pay for meals).  I wondered when exactly was "dinner time?"  On most other carriers I've traveled on, meal and beverage services worked like clockwork, and were very clearly on a schedule.  This did not seem to be the case with Icelandair. Eventually, I just rang the bell, and the flight attendant brought our meals out to us.  The food quality was surprisingly good, although I wouldn't recommend it for those with dietary restrictions.  The choices were: a salad, a sandwich, skyrr (a type of Icelandic yogurt), and chicken.  If you're vegan or gluten free, you'll want to bring something on board with you because only the salad will meet your needs (the chicken was breaded).  There was also a decent variety of miscellaneous snacks and beverages, but what I listed were the options that fit primarily into the "meal" category.

We stopped in Reykjavik to transfer to another flight and were a bit surprised by the boarding process.  I had taken for granted that airlines in the U.S. have fairly particular boarding processes: boarding zone number one, zone number two, etc.  That didn't really seem to be the case here.  For all intents and purposes, it seemed that everyone just gathered into a giant mass until allowed onto the airplane.  As someone that likes order, I must admit this made me a little anxious.  Although, once on board again, out came the little bottles of water handed out by cheery flight attendants, and we were off...

Overall, I know I will fly with Icelandair again.  The staff was wonderful, the entertainment options were good, and the optional 7-day stopover in Reykjavik is a tremendous value.

If I could suggest some changes, I would bring back the complimentary in-flight meal.  Then, incorporate some systems that give customers some indication of "what time things happen" such as meal services, and boarding times.  Finally, consider adjusting the carry-on size limit so that most standard carry-on suitcases are allowed to be actually carried on.

All in all, thanks for the wonderful experience.  We will certainly plan on seeing you again.
By Alacias Enger - January 20, 2020 No comments: