To Trollhattan by Train 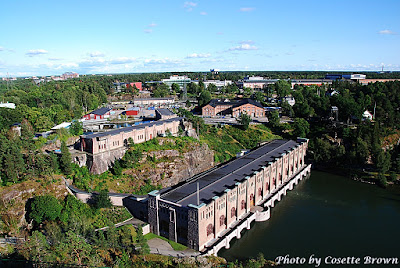 My Great Grandfather Arne grew up on the west coast of Sweden, and eventually made the decision
to start a new life in the United States, leaving behind friends, parents, and siblings.  He eventually came to meet and marry my Great Grandmother, a feisty Norwegian woman, and together they raised three children, one of whom was my Grandfather.  Many years later, when Grandfather had retired, he and my aunt decided to make a trip to Sweden so that he could finally meet his family in person.  In particular, he spent a good deal of time with his first cousin (and his family).  Ever since the meeting of these two men, our families have reconnected.  There have been a few opportunities to meet in person in one country or another, but none I've been so lucky to participate in..  Just prior to this trip, I reached out to our Swedish family, and they invited us to come to see them in Trollhattan.

A couple of days after arrival in Stockholm, we got up early in the morning, grabbed a coffee and croissant, and made our way to Central Train Station.  We took a beautiful train ride across the width of Sweden.  In fact, we were to take two trains and a bus, but apparently, the woman that helped us book our ticket scheduled our bus incorrectly, and the other bus option broke down!  Some travel issues are just unavoidable!  Fortunately, a kind young lady at the bus depot lent us use of her cell phone so that we could call my family who suggested we just stay put because apparently, our bus depot was only about twenty minutes from them.

We drove a short bit through the beautiful Swedish countryside until we arrived at the family farm.  The farm was surrounded with bountiful summer crops in surrounding fields.  The farmhouse was of moderate size and traditional Swedish charm and craftsmanship, which was right next to the greenhouse my grandfather's cousin uses for tomato plants and other vegetable starts.  We were lead through the interior of the house, which contained gorgeous hardwood floors, and an elegant simplicity that often marks Sweden's traditional interior design.  Eventually, we ended up in the sun-room, just off the porch, where the beautiful summer sun poured in through the windows.  I looked across the table to see my grandfather's cousin in sheer amazement.  My grandfather passed several years ago, but looking at his cousin felt as though he had been brought into the room with us.  His wife brought us into the kitchen to dish up.

She had prepared us a traditional Swedish meal.  To say that the spread was impressive would be a grand understatement.  I later learned that she had hesitated to make what she thought was a relatively simple meal, because she thought it a bit too mundane, but I am quite glad that her daughter and granddaughter (who did most of the translation between Swedish and English for us) talked her out of changing her mind.  This was all very exciting for me. I hope no one wishes to revoke my "vegan card," but, knowing my system can handle it, and for the sake of having a cultural experience, I was willing to try it!  She made traditional Swedish meatballs made from the wild pig and elk.  Her husband belongs to a hunting party.  Each year, the party hunts for such game as elk or wild pig.  Once they've completed their hunting for the season, they have the meats prepared and divided among the group.  My family uses their share for food for most of the year and used it to make our meatballs for this particular meal.  The meatballs were served with Lingonberry Jam, which she made herself.  There was Elk roast, again from their own hunt, whole, boiled baby potatoes, cauliflower, green beans, and brown sauce (a bit like a gravy only less thick).  Finally, there was a coffee cake and berry cobbler.  I must say, I'm not sure I'd eaten such a spectacular home-cooked meal since Thanksgiving. 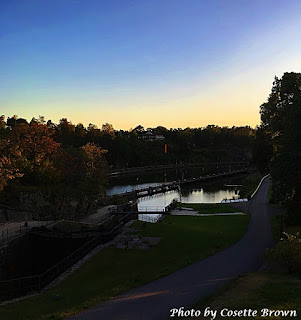 After such a meal, his daughter took us all into Trollhattan (which is about 30 minutes outside of
Gothenburg) to go for a hike along the locks.  We spent a fair amount of time hiking through the locks of Trollhattan until we were able to meet her husband, who helps to control the locks.  We had a light dinner at this outdoor cafe that's somewhat famous for its open-faced sandwiches.  I don't think anyone even looked at a menu, but rather just ordered the sandwich and coffee.  Now, don't be surprised if you try one of these and it doesn't come with anything.  You really don't need the extra sides.  This sandwich is a knife and fork endeavor. This spectacular open-faced creation is piled high with mayo, egg, shrimp, lettuce, and tomato.  Now, interestingly, the mayo was in somewhat an elegant blob underneath the shrimp, not at all mixed in as would be typical of a sandwich with an American leaning.  I admit that I was feeling both curious and amused at the sight of the mayo because I happen to know that my partner greatly dislikes mayo.  I was honestly wondering how this was going to go over.  Now truth be known, I think we'd both have to say this was one of the best sandwiches we'd ever experienced, and if given the opportunity we'll definitely get another! 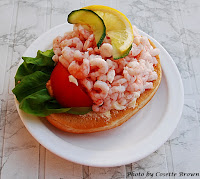 From there, we went to her husband's workplace.  From the outside, it looks like a somewhat commercial looking house.  Upon entrance, one can see that it really is set up like a house with couches, places to rest, a kitchen.  It has everything needed for one of these men on a long shift while controlling the locks.  The primary difference between this place and a house is the sheer number of monitors on the walls.  From these monitors, you can see the locations of the ships or boats, calculate the distance and time until they reach the locks, as well as monitor the water.  It was really quite a fascinating tour.  Additionally, it was fascinating seeing the locks operated, especially so because my partner's father worked on some locks when he was younger as well.

From there, we went to stay at her place until morning when she'd drop us at the train station again...