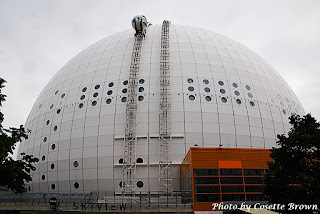 After enjoying a traditional Scandinavian breakfast, we set out for the 2nd day of our Stockholm Pass.  Admittedly, we were making it our absolute mission to maximize the utility of our passes on that day.  We decided to start out by going to the attraction that was furthest away from us, and quite honestly, nowhere near any other attractions.  This attraction is known as "Skyview." 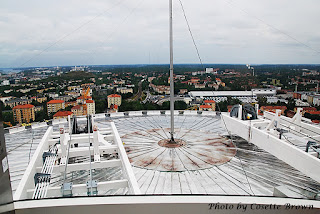 Skyview is an attraction that takes place at the Ericsson Globe, which boasts to be the largest sphere shaped building in the world, and really is something to see in its own right.  We arrived there, and quickly got our tickets.  To our dismay, we had to wait until noon for our turn in the Skypod.  Obviously, we had been unsuccessful in booking a time slot ahead of time, but you may want to investigate doing so if you decide to work this into your itinerary.  There happens to be a shopping mall adjoined to the Globe, so we decided to do a bit of window shopping while we waited.  Not only did we find the decanter of our dreams, but once in the Skypod, we gained access to the best view Stockholm has to offer. 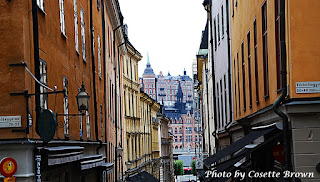 Using public transit, we made our way to the meeting spot for a walking tour of Gamla Stan (Old Town).  We had a bit of time to wait, so we grabbed a beer and a table outdoors until it was time.  There happened to be plenty of options regarding outdoor food and beverages due to a cultural festival happening at that time. 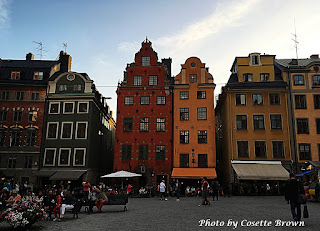 The English version of the Gamla Stan Walking Tour was nothing short of amazing, especially if you're a great lover of history and culture.  We learned about the preservation of the buildings,  and which colors of paint reflect which eras in time.  Additionally, we learned of Stockholm having areas that were built upon garbage!  The tour ended in the square where the historic Stock Exchange building was located.  This square also contains the Nobel Museum and several restaurants, only one of which our tour guide said was "worth giving your money to..."  By this time it was around 3:00 in the afternoon; most museums close around 5:00.  So, despite our sore feet and pending hunger, we decided to quickly walk back a short distance to Kungliga Slottet (The Royal Palace).  Before entering the palace, we quickly grabbed a bite to eat from a food cart (you'll mostly find ice cream, sodas, and hot dogs although the quality difference compared to what we experience in the U.S. is night and day), just to enough to get by for the time being. 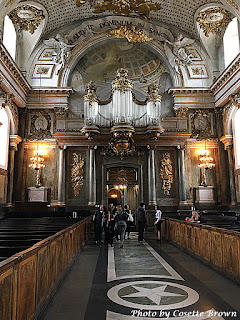 Kungliga Slottet  (The Royal Palace) is a remarkable experience, one that could take the better part of a day if you choose to do so.  If you don't have quite enough time to take in everything you desire, they will allow you re-entrance if you present a ticket purchased within the previous 7 days.  Also, they have storage lockers available, and a fairly useful flier that suggests what to do if you only have: 1 hour, 2 hours, or 3+ hours.  Within the palace lies a beautiful old chapel.  The Royal Chapel is the epitome of Scandinavian design.  It's serenity and beauty make it the perfect place to take a moment to meditate, pray, or otherwise stop to appreciate the splendor around you.  From there, we dashed into the Treasury for a peek at the monarchy's regalia including Gustav Vasa's sword of state and Erik XIV's crown.  From there, we spent the majority of our time remaining touring The Royal Apartments.  The Royal Apartments contain Guest Apartments, the Hall of State, and rooms of the Royal Order.  You can elect to do a guided tour, but in the interest of time, we toured this area on our own marveling at the amazing furniture, furnishings, and decor, which was clearly created by some of the best artists and craftsmen of the time.   We departed The Royal Palace at about 5:00 which is closing time during the summer months (winter times may vary, so check up on these details), and headed back to the square we were at during the Gamla Stan tour.  We stopped into the cafe recommended by the tour guide, Grillska Huset, for a beer and to rest our feet for about an hour. 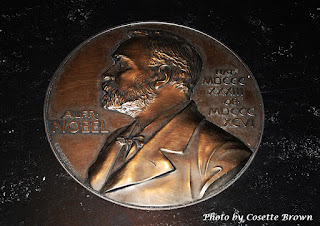 After the break, we went to the Nobel Museum.  Admittedly, we did this mostly because it was right there, we could use our Stockholm Pass, and it was open that night until 8!  It really seemed to provide the most value for our dollar.  To our surprise, it turned out to be one of the most fascinating museums I had ever toured!  Apparently, there are many more displays than they're currently able to house due to a lack of space, and they will be moving to a larger venue in the next couple of years. We were able to catch the last English tour of the day, where we learned the history of the Nobel Prize, and of the mystery behind the fact that only one prize is awarded in Norway each year, and the rest are awarded in Sweden.  We also learned why it is near impossible to determine which country has had the most Nobel Prizes awarded.  Our fascination kept us there until 8 when the closed.

Finally, we made our way back to our hotel where we grabbed dinner at a nearby Indian restaurant called Gandhi.  It was reasonably priced for a sit-down meal, and we were entirely too tired to venture far away.  From there, we grabbed snacks at the grocery store and headed in for the evening.

What I'd Do Differently:
Not succeeding at booking the Skyview attraction for an earlier time slot ahead of time, I might have attempted it on our 3rd/Half Day of the pass because it is so far away from everything else.  That being said, I enjoyed the attraction and felt as though we really did get a lot of value out of the pass that day.  Additionally, it is worth noting that sometimes it's impossible to use a non-Scandinavian credit card to book things online.  This doesn't always happen, but it does at times.  In those cases, you can purchase them at the ticketing location. location.